by Randy Cassingham, creator of the GOOHF card 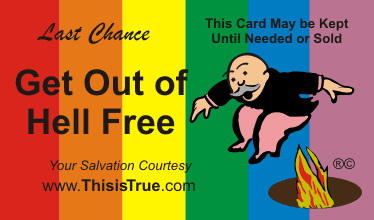 In honor of (and in time for!) “Pride Month” (June), I present the full color “Pride” edition of my famous Get Out of Hell Free® card.

I’ve made no secret that I’m pretty much 100 percent egalitarian. I have defended the religious, the non-religous, “the pagans, and the abortionists, and the feminists, and the gays and the lesbians,” and others in True’s stories (offsite links open in a new tab/window).

I’m interested in whether people walk their talk, not whether they’re religious, gay, atheist, pagan, Muslim, employed, educated — etc. True is the first entertainment email newsletter on the Internet (founded in 1994), and its mission is to provide “Thought-Provoking Entertainment”. 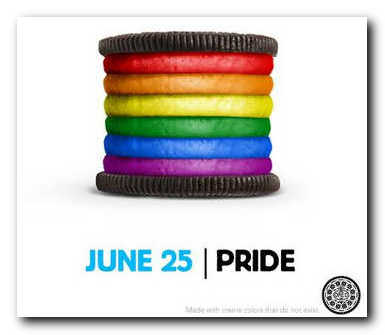 This newest version of the GOOHF (pronounced “goof”) card was inspired by the “Pride Oreo” graphic that Nabisco posted on Facebook on June 25, 2012 as part of LGBT Pride Month.

What fun! But there was that maddening, and almost-impossible-to-read, disclaimer at the bottom: “Made with creme colors that do not exist.”

Unlike the Oreo, the GOOHF card is real. You can order some below, or from my shopping cart, which is recommended if you want large quantities (Jumbo Packs of ~500 cards are available at a nice discount).

I had 100,000 of them printed, and they are priced exactly the same as the regular GOOHF cards — no discrimination is practiced here!

Won’t Some Be Angered by This?

Well hell yeah! —er, I mean, “yes.” But that’s OK, I’m used to it. I’ve been condemned to hell by the best: the quivering, the sanctimonious, the finger-shaking (and -pointing) moralists who demand that everyone must think exactly the same way they do (and while some of them are pretty amusing, a few of them really sick bastards!)

I simply refuse to bow to the idea that some people are less equal than others.

As for the “religious right,” marriage traditionalists, etc., yes: I anticipate some heartburn there. The This is True newsletter is billed as “Thought-Provoking Entertainment”. Some readers will certainly resent being provoked to think about this issue and will “unsubscribe” in protest.

That’s where you come in: I need to replace those people with others who aren’t afraid to think for themselves. If you love the idea behind this card, you definitely need to get on my newsletter mailing list: Click Here for Subscription Form.

Or See other order quantities/options.

Author Randy Cassingham is best known as the creator of This is True, the oldest entertainment feature on the Internet: it has been running weekly by email subscription since early 1994. It is social commentary using weird news as its vehicle so it’s fun to read. Click here for a subscription form — basic subscriptions are free.