What is the Message When People Buy (now) Two+ Million Parody Cards Allowing the Holder to “Get Out of Hell Free”?

To be sure, there is a message — and a social phenomenon in what its creator calls “the GOOHF card” (pronounced, of course, “goof card”). It’s a story of the rejection of religious intolerance, a statement of “I can think for myself, thank you,” and an example of real world “viral marketing” created by a savvy pioneer in online publishing.

Once the cards were created by Randy Cassingham, his newsletter readers (Click Here for Subscription Form) went wild for them.

The response was intense. When Randy told his readers about the card in May 2000, he offered them the opportunity to get their own cards so they too could have a response to people who told them what to think or believe. For $1 (the cost of printing, packing and postage), he’d send them 10 cards.

Dollar bills started showing up by the hundreds. The first 2,000 cards were sold out by the third day! And this was by mail order — at first, Randy didn’t even offer them for online purchase (this was the year 2000, after all: still the dark ages of the Internet!) 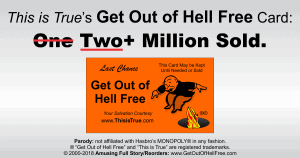 It led to the card’s slogan, also coined by Randy: “Sin All You Want, We’ll Print More.”

Were these thousands of cards all selling 10 at a time?!

No: that was the magic. People didn’t want 10 cards, they wanted many, many more: the average order is for 300 cards; many have ordered 1,000 — and then came back later for more.

There’s only one reason anyone would buy more than a few: they really are giving them away, but not usually to people who vex them. Rather, the most common reason to give a card away is to make someone’s day better — the store clerk who just dealt with a screaming customer. The waitress whose diner is never satisfied. The fellow employee who needs the message, “I have to deal with our idiot boss too.” (Several buyers have said they stapled a card to their letters of resignation!)

But yes, they also give them to people who vex them — the moralists who say “You shouldn’t be gay!” or “Playing cards are tools of the Devil!” or “You shouldn’t hold hands in public!” or “You shouldn’t teach evolution!” or “Dancing is immoral!” or “What? You’re Jewish/Mormon/Catholic/Protestant/not ELCA?!” No matter what you do, or don’t do, are, or aren’t, there’s someone who thinks you’re immoral. The card is the perfect answer to those who would dare to dictate your beliefs to you. More about this on Randy’s essay about why he thinks the cards are so popular from a cultural standpoint.

We often hear of how things online can “go viral” on the Internet — something just catches on. A photo gets forwarded a million times, or the link to a great video suddenly shows up in 50 blogs on the same day.

The GOOHF card is an example of offline viral marketing. Indeed, Randy thought of it that way on Day 1, back in May 2000, perhaps making it the first online-to-offline viral crossover — or at least the first successful one. It’s why he offered the cards to his readers for the cost of printing and postage!

“I didn’t feel a need to make a profit on the cards,” Randy says, “because they all have my URL on them. Rather than create a photograph or video for people to pass around online, I created a real object that I knew would be passed around in the real world. And what’s better in the ‘dotcom’ era than to have your URL spread around?” The customers pay the cost of creating the viral object, he says, and they benefit by the good feelings and message that they pass along with the card.

“It’s a terrific win-win,” Randy says. “Not to mention that it works: people wonder who’s behind the card, and they check out the site mentioned there. It has led to a lot of traffic, and a lot of new subscribers to my weekly news commentary newsletter.”

The cards were also used as a sort of “relief effort” for the Iraq war. This is True readers contributed to a fund to send more than 21,000 cards to U.S. servicemen and -women deployed in Iraq and Afghanistan (the story).

“I’d love to be the Typhoid Mary of GOOHF cards and stickers for the whole of Iraq,” said the U.S. Army captain who accepted the cards for all military branches deployed in Middle East. “Since a lot of needed items are usually bartered in the Army (supply sergeants haven’t changed since the revolutionary war), it’s amazing what a gimmick or gadget can get you. Especially if it makes people laugh.”

But the Love Isn’t Universal.

Sure enough, some people absolutely hate the cards, calling them (just like the original reader) “anti-Christian.” Never mind that hundreds of church pastors have ordered the cards themselves.

“There are two priests posted at the Vatican — that I know of — who have the cards,” Randy says. “One even admits he wears his GOOHF T-shirt under his cassock sometimes.” Most Christians love the cards, he says. In fact, “I’m sure most of the people who order them are Christian.”

But certain fundamentalists waive that all aside and continue to condemn him, completely missing the entire point, he says. “In This is True, I can smile at the foibles of politicians, criminals, school officials, landlords, cops, military officers, students, bus drivers, athletes, farmers, animals, royalty, conservatives, liberals, and everyone else but Christian fundamentalists,” Randy says, “because if I dare to suggest that they are human too, a few crybabies will stamp their feet and shake their Bibles at me, sputtering with quivering, anonymous voices that I’m going to hell. What a sad example of Christianity indeed.”

The cards are about rising above irrational emotion. “To be sure, in the grand scheme of things complaints from just a few people now and then is not a big deal; what gets me is that they’re not a thoughtful ‘I disagree with you, and here’s why’,” Randy says. “Rather, I tend to get the bit about how ‘our merciful God is going to condemn you to suffer in hell for eternity because you do not believe the exact same way that I do, even though I don’t know why I do.’”

Yet Most Christians Love Them

Does he really think most of the card’s buyers are Christian? “Absolutely! Most of the country is, and while we’ve sold the cards all over the world, quite naturally most of the cards are sold in the U.S. Most of these buyers use their beliefs to enhance their own lives, rather than use them as a weapon to try to condemn or control others. Luckily, most people who believe in God also believe that He has a sense of humor, and know their personal beliefs are not the only way to think.”

One This is True reader wrote to say he was in a bar in Paris, and a business associate wrote down a phone number for him — on the back of an orange card. He said he knew what it was before he turned it over.

The GOOHF world expanded in October 2002 with the introduction of a T-shirt with the card image on it. By this time, Randy had set up online ordering. Good thing: in the first six weeks 1,100 shirts flew out the door. “The shirts outsold my This is True books that holiday season,” Randy says.

Later, stickers were added to the line-up, as well as coffee mugs, credit-card-like plastic GOOHF cards, and, to celebrate the millionth card sold, a lenticular (moving image) post card, illustrated above. “It has become its own little cottage industry for us,” Randy says. “I have some more goodies in the works too.”

“But the best part,” he says, “is that it supports my This is True newsletter and its main goals, which are to entertain people first, and make them think as a close second. That the card can also do both upon its first glance is probably the real secret to its success.”

Q: Wait: Over 2 million cards, at $1 for 10? That’s more than $200,000!
A: Why yes, yes it is! Just remember that by design, the price is meant to break even. The GOOHF cards make up the bulk of our mailings by far, and account for the majority of our five-figure annual postage bill.

Q: Who is Randy Cassingham?
A: Randy, the creator of the GOOHF cards, is a successful online columnist and one of the first for-profit subscription email publishers. He writes and publishes This is True, a thought-provoking entertainment newsletter based on weird-but-true news stories with added commentary. True is one of the first online subscription features (established 1994), and is still going strong. Randy is a former software engineer at NASA’s Jet Propulsion Laboratory, and is also the author of the True Stella Awards, a look at ridiculous-but-true lawsuits and their impact on society. The TSA book was published in Fall 2005 by Dutton (a division of Penguin Books). It was reissued Fall 2006 in paperback.

Q: Does Parker Brothers object to the cards?
A: Hasbro, which bought out Parker Brothers (and its popular MONOPOLY® board game) in 1991, indeed objected to the GOOHF card. However, it is a strongly established right in the U.S. to create parodies of popular culture; the GOOHF card is clearly a parody of the MONOPOLY® “Get Out of Jail Free” card. Hasbro did demand that we stop selling the cards, but we refused — it is our right to produce parodies. But for clarity, each GOOHF card contains a disclaimer noting it is not affiliated with Hasbro’s MONOPOLY® in any fashion.

Q: Who buys GOOHF cards?
A: Just about anyone and everyone: ministers, lawyers, cops, firefighters, computer geeks, truck drivers — or, more simply, regular people from all over the world.

Q: The mail-order address is PO Box 666. Is that on purpose?
A: Absolutely. We were randomly assigned Box 668, but when Randy saw Box 666 was available, he asked for it. It seems to be the perfect address for the cards — a wink toward the absurdity of taking things too literally.

Q: I’m a reporter. Is there a reproducible image of the card available?
A: Contact Randy Cassingham with questions and any press support needs.

Q: This page is pretty old now. Is the number still going up?
A: Certainly! This page was originally posted when the millionth card was sold in 2006. The total hit 2 million in 2015 — and is still rising.

Author Randy Cassingham is best known as the creator of This is True, the oldest entertainment feature on the Internet: it has been running weekly by email subscription since early 1994. It is social commentary using weird news as its vehicle so it’s fun to read. Click here for a subscription form — basic subscriptions are free.